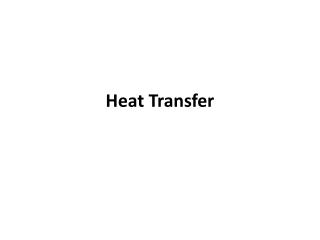 Heat Transfer. introduction. Heat transfer is the movement of energy from one point to another by virtue of a difference in temperature . Heating and cooling are manifestations of this phenomenon, which is used in industrial operations and in domestic activities. RADIATIVE HEAT TRANSFER - . thermal radiation is the electromagnetic radiation emitted by a body as a result of its

CHAPTER4 Nucleate Boiling Heat Transfer and Forced Convective Evaporation - . topics to be presented in this chapter