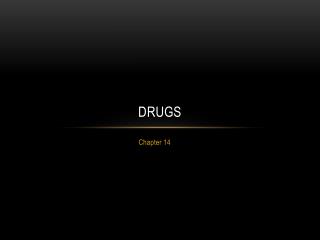 Drugs. Chapter 14 . Journal entry. When you hear the word “Drug” what do you think of? What is an example?. Objectives. Explain the difference between drug misuse and drug abuse. Identify the risks of drug abuse Identify the most commonly used club drugs.

WHAT ARE DRUGS? - . drugs are substances taken to change the way that the mind or body works. drugs do not always come

Physicochemical Properties of Drugs in relation to Drug Action - . roselyn a. naranjo uspf, college of pharmacy

PASSAGE OF DRUGS ACROSS MEMBRANES - . a drug must cross one or more biologic membranes to reach its site of action

DRUGS - Thesis statement . drugs . drugs are the major cause of abuse. people that use drugs get addicted but when they

Understanding Drugs and Medications - . what are drugs? where do drugs come from? what are the different kinds of drugs

Drugs - . drug abuse. two types of dependence psychological- the conditioned use of a drug caused by underlying