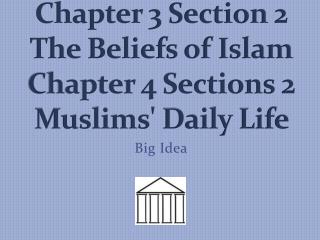 Chapter 3 Section 2 The Beliefs of Islam Chapter 4 Sections 2 Muslims' Daily Life . Big Idea. California Standards. Social Studies Standard 7.2.2: Trace the origins of Islam and the life and teachings of Muhammad, including Islamic teachings on the connection with Judaism and Christianity .

Chapter 11: Test Your Proficiency - . directions: select a section to work on. work out each problem on a piece of paper.

Chapter 6, Process Synchronization, Overheads, Part 1 - . fully covering chapter 6 takes a lot of overheads. not all of