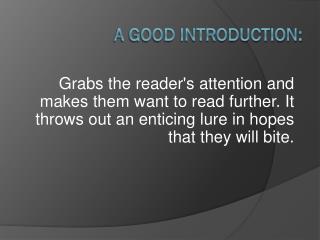 The “Good” Life - . what is the highest quality life we can pursue?. introduction. the “good” life today as in

Leadership and Values - Introduction. the call for leadership is merely a cry for good administration as opposed to bad.

An Introduction to Good Governance - . the concept of good governance in the modern world is not even 25 years old.

Are We Good? - Unit 1: theme 3. are we good?. good-o-meter what is the moral of the video? discuss whether or not

What makes a good presentation? - . making a presentation. a good introduction will capture your audience’s interest. a

Introduction to GIS - . lecture 1. introduction. what is this class about? lectures: t and th only. labs: when and who