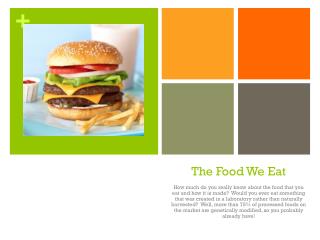 The Food We Eat. The Food We Eat - . where does it come from?. how does it impact our world?. farms, farms, farms…. this is what we

Processing the food we eat - . why do we need food? . reactants for cell respiration (energy) building blocks for new

THE SCIENCE BEHIND THE FOOD WE EAT - . an informational book for children. this is martin the genetically modified

Why Do We Eat Food? - . five reasons why fueling your body right is important!. #1 - energy. food gives you the fuel for

The Vegetables We Eat - . by carolyn wilhelm. licensed graphics. this is a pdf work page and answer key. click on it to

The Plants We Eat - . mrs. arnold kindergarten science. objectives. -students will be able to list the different types

Topic 2: Where does the food we eat from? - . julio león, marina lópez y maría rodríguez. where food comes from?. the

How does the food we eat contribute to Global Warming? - . by class 1. very little of the food that we eat is produced

WE ARE WHAT WE EAT - . “there’s the only way to be happy - it is to be healthy”. dieting. many americans believe