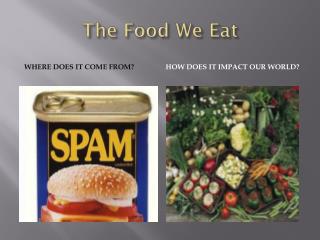 The Food We Eat. Where does it come from?. How does it impact our world?. Farms, Farms, Farms…. This is what we think of most of the time when we think about a farm and where our food comes from. The Reality. There are fewer than 2 million farmers. (1 to 129 ratio). Processing the food we eat - . why do we need food? . reactants for cell respiration (energy) building blocks for new

THE SCIENCE BEHIND THE FOOD WE EAT - . an informational book for children. this is martin the genetically modified

Why Do We Eat Food? - . five reasons why fueling your body right is important!. #1 - energy. food gives you the fuel for

The Vegetables We Eat - . by carolyn wilhelm. licensed graphics. this is a pdf work page and answer key. click on it to

The Plants We Eat - . mrs. arnold kindergarten science. objectives. -students will be able to list the different types

Topic 2: Where does the food we eat from? - . julio león, marina lópez y maría rodríguez. where food comes from?. the

How does the food we eat contribute to Global Warming? - . by class 1. very little of the food that we eat is produced

WE ARE WHAT WE EAT - . “there’s the only way to be happy - it is to be healthy”. dieting. many americans believe