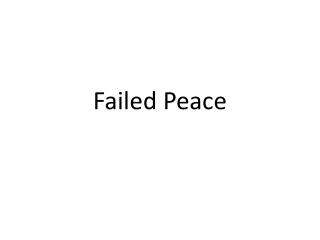 Munich Germany - . by riley higgins. map of germany. map of europe. climograph. the most relied on river is the isar.

A Bastard Peace - . williams uses this poem to express his view on poverty and even though the expressed characters live

The Failed Peace - . now that the war was “over,” wilson traveled to france to help the allies set the terms of peace

A Failed Peace - . chapter 29 section 4. i allies meet at versailles a. wilson’s plan for peace. allied powers meet in

ARMISTICE: A Failed Peace - . the post wwi world. by the early summer of 1918, fresh american troops and tanks turned the

Depression, Reaction and the Return of World War - . how did a world order devoted to peace in 1920 become engulfed in

Hanoverian Britain - . the whig supremacy, 1714-1760. hanoverian succession. not contested by bolingbroke and jacobites,