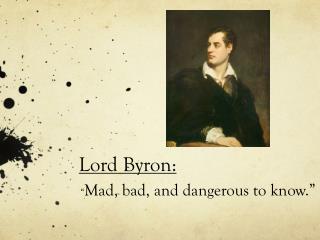 Lord Byron:. “ Mad, bad, and dangerous to know.”. Early Life. Born George Gordon Byron in London, England in 1788 Descendent of King James I When Byron was 10 years old, his uncle died, giving him the title of “Baron” (a rank in British nobility) and entitling him to a large estate The Context of ‘Lord of The Flies’ - . walt understand the historical backdrop of the novel. starter. working alone;

Lord of the Flies - . intro 1.4.3. today we’ll comprehend the atomic age and how it was experienced by the survivors of

SPIRITUAL WARFARE - . sooner or later every believer discovers that the christian life is a battleground, not a

Clap your hands, all peoples! Shout to God with loud songs of joy! For the Lord , the Most High, - Call to worship. psalm

We Provide the Following Services to Brazos Valley Residents - . personal prayer: we will pray for you &amp; your

“For the Joy of the Lord is your Strength” Nehemiah 8:10 - . the feast of trumpets by pastor fee soliven sunday

Be Thou My Vision Be Thou my vision, O Lord of my heart; - Naught be all else to me, save that thou art: thou my best

Lord of the rings - . starring legolas, aragorn and that short guy with the axe. oh shit!. pow! bang! wazaa! bling