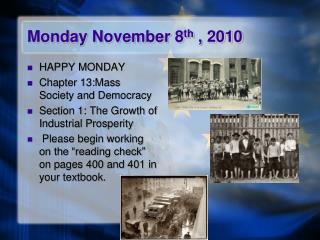 Monday November 8 th , 2010. HAPPY MONDAY Chapter 13:Mass Society and Democracy Section 1: The Growth of Industrial Prosperity Please begin working on the “reading check” on pages 400 and 401 in your textbook. Why did Europe dominate the world economy by the beginning of the 20 th c?. Monday, November 8 th - . open to assignment #2 in your interactive notebook. title the left side: preview title the

Monday, November 8 - . check in: finish your thinking map from friday, and start writing the rough draft for your next 6

Monday, November 25 th - . to kill a mockingbird. please take out your books to read agenda: review of chapters character

Monday, November 7 th - . warm up. please complete warm up did you write down the homework?!!?. simplify solve . today:

Monday, October 8 th - . br: during this coming week, what are the 5 ‘activities’ that will consume most of your

Monday 8 th December - . smile it’s poetry success criteria: i can understand how to deconstruct a poem using smile i