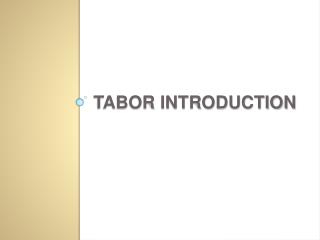 TABOR Introduction. TABOR. Tax policy idea that is being proposed in Florida Call it the Taxpayer Bill of Rights In Florida it’s also being called “Smart Caps” It is dangerous to Florida’s economic health Has only been implemented in Colorado Tabor masters - . we went around lake jordán. we saw water tower and went through the park velký šanc. we were in

Pastor Tim Tabor - . church on como. colossians 3:1-17 niv 1 since, then, you have been raised with christ, set your

Welcome to My Tabor - . groupwise &amp; my tabor (lms) training student orientation fall 2008. while at tabor.

Ohio’s TEL/TABOR: Closing the Door to Public Libraries? - . what is tel? what is tabor?. ohio’s tel is a state-wide