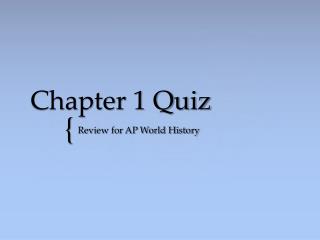 Quiz: Chapter 13 Section 1 Currents - . how well do you understand this section? each question will only be on the screen

Chapter 1 Quiz - . why does dad turn on the tv? what does dad tell the kids about moses henderson? what is meant by a

Chapter 10 Quiz - . motivation and emotion. don’t forget to write your answers on a separate piece of paper to grade

Quiz Show - . financial literacy chapter 1 quiz review. a gift of money or other aid awarded to a student to help pay for

Lord of the Flies Reading Quizzes - . chapters 4-6 – catch-up quiz on key scenes from these chapters chapter 7 –

Property Quiz - . test your knowledge of properties from chapters 1 &amp; 2. name the property demonstrated: if 3g =

Part One: Chapters 1-4 - . who is telling the story? when and where does the story take place? what has changed hugo

Chapter 1 Reflections and Questions - . flipped: diving under describe bryce’s feelings about julianna when they first