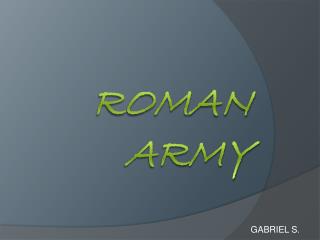 The Punic Wars - . world history. essential question: why were the romans able to conquer italy &amp; the

The World of the Late Roman Empire and The Late Roman Army - . the historical context the most important changes to the

The Roman Army - . the most formidable military machine. in the early days. conscription: citizen soldier. all campaigns

Roman Civilization - . after octavian became augustus, rome will begin a 200 year period of peace known as the pax romana

THE ROMANS - . by charlotte oakeley. who where the romans ?. the romans lived in rome, a city in the centre of the

The Late Republic - . pgs. 338-343. growth of territory. roman had to give the gauls a huge amount of gold to leave the

The Romans - By s askia b irt. the romans. who were the romans?. watch this to find out. the romans lived in rome. the

THE ROMAN - . by tom. baths . slaves scraped perfume and oil of the wealthy with a knife called a scrigall woman went in

romans - . by joseph whittington. roman gods and godesses. march the month is named after mars the roman empror . august

The Roman Empire - . by davis guthier. the weapons and armor they had in the roman army. the roman equipment (especially

The Roman Army - . every other slide in this show is in “times new roman” font. . by oliver w. the roman

The Fall of the Roman Empire - . western civilization december 6, 2012. diocletian and constantine. political and