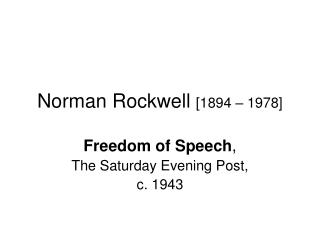 Rene Magritte and Norman Rockwell - . rene magritte (1898-1967). “ it is a union that suggests the essential mystery of

NORMAN ROCKWELL - . by ethan kozo. early life. born in 1894, in new york city grew up in a rough and tough neighborhood

Rosie the Riveter - . by norman rockwell, published on the cover of the saturday evening post on may 29, 1943 became a

Norman Rockwell Contemporary American Illustrator - . “without thinking too much about it in specific terms, i was

1978 - . peoples democratic party seizes is too powerful and split in the ethnic lines so that’s how the war began in

Making Inferences by Closely Observing Norman Rockwell Paintings - . what is an inference ?. a logical conclusion based

Norman Rockwell (1894-1978) - . norman rockwell drew pictures of everyday scenes with everyday people. in fact, many of

Who is Jim? - . looking at jim through the years. scenes artists like to depict jim in. when jim sees huck’s