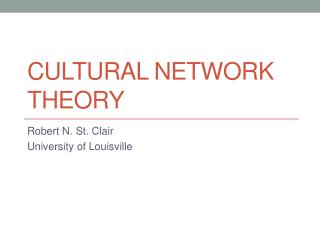 Cultural Network Theory. Robert N. St. Clair University of Louisville. The Stratification of Culture. Each generation differs from others by being socialized in a slightly different way. Each generation has its own heroes and villains. It has its own visual icons and music idols. .

The Actor Network Theory (ANT) - . it’s a distinctive approach to social theory and research which originated in the

INTRODUCTION TO CULTURE, CULTURAL STUDIES, AND POPULAR CULTURE - . this is our proposed model for reading images:.

The Cultural Industry Theory 1944 - . by connor redman. what is the

A Learning Theory for the Net Generation - Can you guess what this puzzle says?. go to this url to put the puzzle