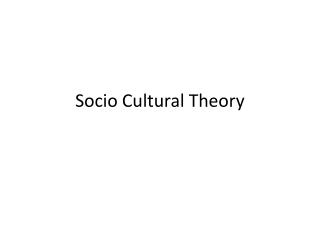 Socio Cultural Theory. INTRODUCTION. Sociocultural theory is an emerging theory in psychology that looks at the important contributions that society makes to individual development. This theory stresses the interaction between developing people and the culture in which they live.

How to Use Theory - . to support ideas to explain something complicated to understand something confusing to clarify

Demographic, Health and Socio-economic Effects of HIV and AIDS - . presentation objectives. by the end of this session