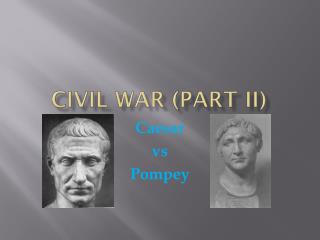 Civil war (part II). Caesar vs Pompey. Anti-Caesar. Caesar had granted citizenship to Gauls Marcellus beat a Gallic man and denied trial Marcellus tried to shorten Caesar’s command His cousin decreed that Caesar and Pompy should give a legion to defend Syria Civil War, Part II - . how does the war effect civilians? how does the south sink to it’s knees?. war on the homefront.

The Civil War (part II) - . please pick up the psi packet and the semester exam study guide from the cart. we will

The Civil War - . part ii: the course. slavery……. one of the top reasons why our southern states decided to secede

The Civil War - . do now: take out class materials (notebook and packet). answer this in your notebook: what are the

American Civil War - . by: youssef badr aoi: human ingenuity how can the past become the future?. who was the war

Civil War - Part 1 - . introduction and opening shot. why is it called the “civil” war?. definitions of civil on the

Civil War - Part 1 - . introduction and opening shot. why is it called the “civil” war?. definitions of civil on the