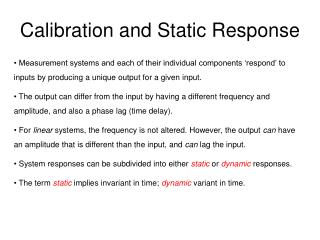 Calibration and Static Response. Measurement systems and each of their individual components ‘respond’ to inputs by producing a unique output for a given input. The output can differ from the input by having a different frequency and amplitude, and also a phase lag (time delay).

Chapter 14 – More About Classes - . 14.1 static members. if a member variable is declared static , all objects of that