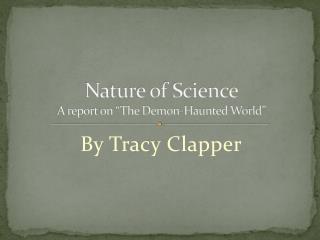 Nature of Science A report on “The Demon-Haunted World”

Nature of Science A report on “The Demon-Haunted World”. By Tracy Clapper. Tenets of the Nature of Science. Scientific Ideas are subject to change Scientific thought requires skepticism Science demands evidence Science is a blend of logic and imagination

Nature of Science A report on “The Demon-Haunted World”

Writing a Research Report in APA Publication Style By Dr Rojnath Pande - . a research article. a concise description of

Supernatural Beings - . supernatural : “above the natural” not obeying the laws of nature as we know them. many times

The Supernatural - . adjective a manifestation or event attributed to some force beyond scientific understanding or the

The Girl in the Haunted House - Outline - . ms. nelson’s beginning drama class. once upon a time there was…. a girl

The Haunted Oak - . by paul lawrence dunbar. task. fold your white art paper into eight boxes and then select a pencil .

Darcy A. Freedman, MPH, PhD - Market to mouth – coming full circle what do people do with foods purchased at a health

What is the Anthropology of Science and Technology? - . downey and dumit, introduction to cyborgs &amp;

Chapter 0: So what are we doing here?” - . my goal, give you example and practice in how science thinks and how we