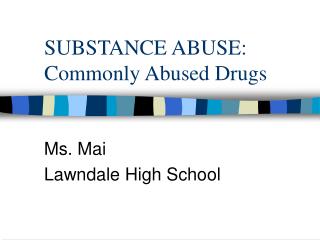 Commonly Abused Drugs - . depending on the category, drugs may depress or stimulate body processes, or they may alter

309: An Overview of Commonly Abused Prescription Drugs - . learning objectives. participants will be able to: associate

SUBSTANCE ABUSE - . bolintiam , lu, rivera, sioco , veloso. what is substance abuse?. the harmful or hazardous use of

Substance Abuse PowerPoint Outline - . as you are researching the substance, write in the information on the appropriate

Substance Abuse - . lesson 3: marijuana. warm-up # 3. get out your facts on the north carolina drinking laws that you