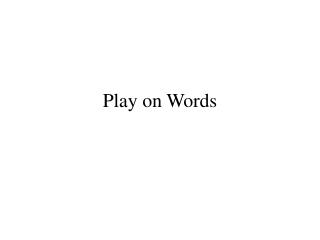 Play on Words. 1. Two vultures board an airplane, each carrying two dead raccoons. The stewardess looks at them and says, "I'm sorry, gentlemen, only one carrion allowed per passenger.". 2. War on Words - . who should protect journalists in conflict?. a free press can of course be good or bad, but, most

Words On Wisdom - . james 3:13-18. words on wisdom. our journey through james continues as we wrap up chapter 3 tonight

Theoretical Perspectives on Play - The 20th century. behaviorismpsychoanalysisconstructivismcognitive psychology. what is

Final Words on Othello - . mr. moccia. back to shakespeare’s “greatness”. what were the four aspects of

Presentation on Troublesome Words - . sit and set. sit means “ to take a seat or sit down .” i want to sit here a

COME PLAY ON PLUTO!!!!! - . “need a vacation? need to get away from the hustle and bustle of the city? if so, make

Play iTunes On Roku - Do you want to know how to play itunes music roku player, this article will help you. if you need