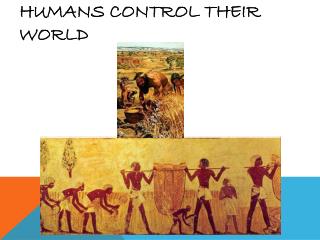 The Technological World - . humans have always invented and produced objects that have helped them survive and live more

Humans are 0.1% different - . : 80% of this is from small scale structural variants in our dna : the snps ( pronounces

The Evolution of Humans and the Paleolithic Era - . middle school workshops session 2 craig benjamin. when did the first

CHAPTER 6: HUMANS IN THE BIOSPHERE - . humans in the biosphere in 1778, europeans arrived on the island chain of hawaii.