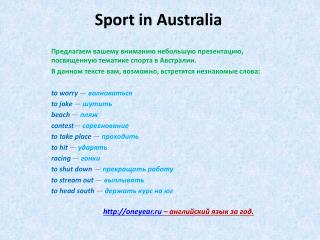 Australia - . geography. australia is located in the southern hemisphere. it is the 6 th largest country as well as the

Sport + Physical Activity as a reflection of the culture in which it exists - . the united kingdom the usa australia. 19

Australia - . part one the land and the people of the dreaming the land 1. the natural environment of

Australia In the Vietnam War Era - Major issues. australia's response to the threat of communism in asia after wwiithe

MY FAVOURITE SPORT - . my favourite sport is tennis i’ve got a red skirt and a pink t-shirt i`haven’t got a football