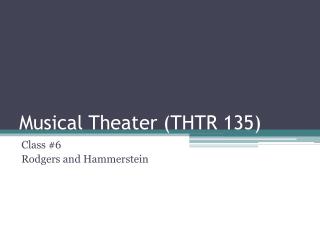 Musical Theater - . basic breakdown. singing. acting. dancing. step. be prepared!. know what they expect from you !.

Musical Theater - . vocabulary. operetta: a short, light, comedic opera. vaudeville: a theatrical production made up of

Musical Theater - . “to equip students with the tools necessary to become marketable and well-rounded musical theater

Elements of Musical Theater - . lyrics. a theater lyric is a compact pattern of words that when set to music communicates

The Golden Age of Musical Theater - Where we are coming from:. the great depression is in its end stagesirving berlin has

HIS 135 Academic Coach/uophelp - For more course tutorials visit www.uophelp.com his 135 final project: most