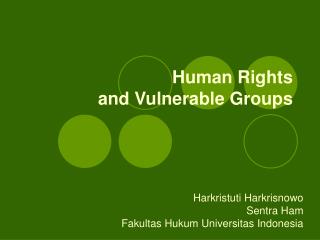 Human Rights and Vulnerable Groups. Harkristuti Harkrisnowo Sentra Ham Fakultas Hukum Universitas Indonesia. Why need to be studied. They are groups of individual who are sociologically vulnerable Tend to be victimized Perceived as having a somewhat ‘lower’ place in the social structure

IN THE CARIBBEAN - Human rights. “from risk to vulnerability caribbean and global perspectives”. and hiv. in the

Vulnerable but resilient - . escap’s work on the impact of the tsunami on older persons. objectives of the project.

equitableproject - Equitable and the equiframe manual equiframe : a framework for the analysis of human rights and

11 Safeguarding Vulnerable Adults - . sector guidance. recap as a whole group what is …. significant harm what is a

EquitAble and the EquiFrame manual EquiFrame : A Framework for the Analysis of Human Rights and Vulnerable Groups in