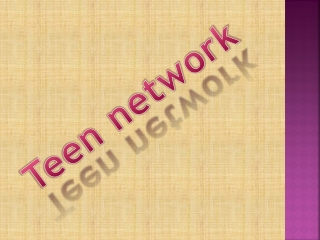 Teen Dating - . harmless fun? or potential danger?. what is teen dating?. teen: a person aged from puberty to maturity

Teen Girls and the Media - . how is the media a bad influence for teen girls?. self-esteem issues. 70% of teen girls

Teen Pregnancy… So what? - . an overview of the teen pregnancy problem in america prepared by the national campaign to