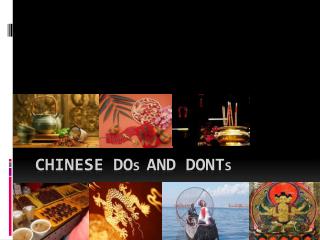 Chinese Do s and dont s. S mil ing Respect the Elders G reet the eldest person T ouch your glass below that of the eldest person in the group . B e punctual. ( Respect ). About Gifts. P rese nting gifts Refusing / accepting gifts If you give an unlucky gift accident ally …. Chinese Food: Behind the Scenes - Introduction. chinese food is very popular in the united states. however, there is a

Chinese Clothing, Chinese Dresses - Chinese moods is one of the best provider of chinese clothing who deals in

Chinese Immigration - . senior seminar. the chinese immigrants. gold discovery in ca in 1848 led to many chinese

Do’s and Dont’s with L ikelihoods - . louis lyons ic and oxford cdf and cms triumf may 2012. topics. what it is how

Chinese New Year - . chinese new year, celebrated with the moon, is a honored chinese tradition. this character is