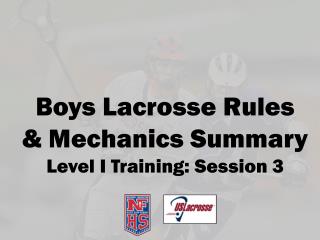 History of lacrosse - . *lacrosse, considered to be america's first sport *was born of the north american indian

Pre-Game Responsibilities for Lacrosse Officials - . your team…. contact each member of your officiating team prior to Chapter 15 - . understanding the mechanics of injury. stress. controlling the level of imposed stress is important in