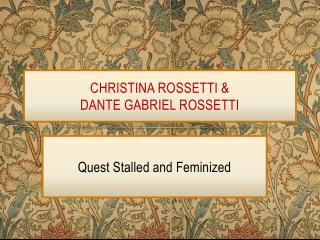 The Pre-Raphaelite Brotherhood and the Aesthetic Movement - . pre-raphaelite brotherhood. group of painters who banded

Christina Rossetti - . remember. section?. this is one of the poems about death – it goes in that theme. try and use it

Poem or Song? - . i hate you with a necessary hate. poem. “the destroyer of a soul” lionel johnson. when i am dead,