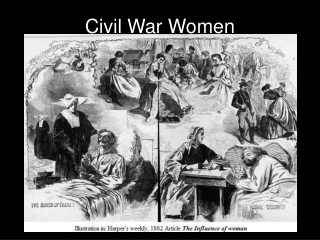 Civil War Women. Women played a vital role in the war effort in both the North and South. Kept “the home fires burning” Nurses Fundraisers Authors Advocates Laundresses, camp helpers Spies Soldiers.....and many more. We will simplify this into 4 broad categories:. Homefront Healing

CH. 9-2 - . women in public life. women in the work force. what kind of work was available to american women before the

Life of Children and Families during the Civil War - . by: valerie kubalak period 5. ueq: in what ways did the civil war

HERstory - . women and the civil war. for women, the civil war “ represented both burden and opportunity ”. how did

Women’s Suffrage - . section 4. preparing the way. susan b. anthony. arrested in 1872 for act of civil disobedience as

Women in the Civil War - . the civil w ar is the first time women played a significant role in the war. women turned

Women and equality - . presentation by victoria and ethan. many women who fought for civil and workers’ rights later

Civil War facts - . more than three million men fought in the civil war about 900,000 for the confederacy and 2.1 million

Women and the Civil War - . by allison payne. women played a significant role in the civil war and outside of the war.