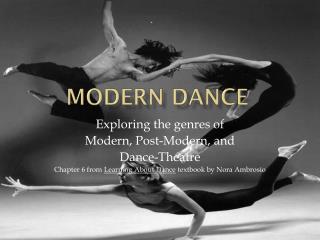 Modern Dance. Exploring the genres of Modern, Post-Modern, and Dance-Theatre Chapter 6 from Learning About Dance textbook by Nora Ambrosio. What is Modern Dance?. Modern Dance - . what is it?. developed in the 20 th century (late 1800s) developed in direct contrast to ballet. broke

MODERN DANCE - . a reaction against ballet. the early 1900’s-1930’s embraced the careers of american dancers who

MODERN DANCE - . modern dance. developed in the 20 th century out of the performer’s desire to communicate feelings or

Modern Slow Dance - . by t. left feet. slow dance etiquette boy. boys make eye contact with the girl you would like to

Modern Dance Pioneers - . a brief history of modern dance the creation of an art form. why was modern dance different?.