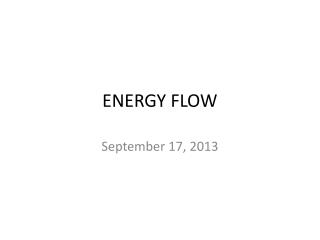 Energy Flow - . how does energy move through the ecosystem?.

Energy Flow - . energy. the ability to do work energy has no mass nor volume but is only detected by its effects

Energy Flow - . from the sun, through an ecosystem, into heat. autotrophs / producers. auto = self-made example:

Energy flow - . ch. 2.1. i. energy roles . a. an organism’s energy role is determined by how it obtains energy and how

ENERGY FLOW - . where does the snake get energy

Energy Flow - . energy. energy is the ability to do work and transfer heat. kinetic energy – energy in motion heat,

Energy Flow - . i can construct pyramids of number and pyramids of biomass i can explain efficiency of energy transfer

Energy Flow - . introduction. all ecosystems must have a source of energy (usually the sun) because all organism

I. Energy Flow - . a. producers make their own food through photosynthesis using sun, water, and carbon dioxide plants,

Flow of Energy - . source of energy. sun = sol. raise your hand if you included this on your schoolyard diagram. the sun

Ecosystems: Energy Flow - . objectives. predict what would happen to an ecosystem if an energy source was removed