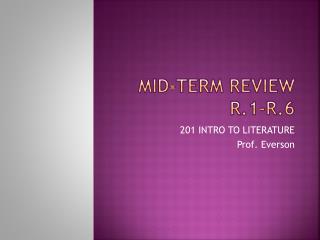 Mid-Term review r.1-r.6. 201 INTRO TO LITERATURE Prof. Everson. The girl burst out laughing; she knew she was nobody's meat. She laughed at him full in the face, she ripped off his shirt for him and flung it into the fire, in the fiery wake of her own discarded clothing. Title?. Mid Term Review - . english iii honors. ethan frome. use of light/dark imagery to contrast zeena and mattie who was a

CS 445 / 645 Introduction to Computer Graphics - . lecture 16 lighting. review. we have a model for determining the

Second Mid-term - . in class on monday, april 7. no books or notes during exam. bring your own paper don’t need “blue

Quick Mid Term Review - . multiple choice questions! . which of the following is not a pure substance?. water carbon

Factoring Review - . 1. review. 2. tying it all together. 3. shortcut for the shortcuts. greatest common factor (gcf).

Review Vocab - Ancient greeks chapter 9. review vocab. what is referring to the cultures of ancient greece or rome? it is

Quiz 8 Review - . vocab. 2x2 system of equations: two equations working together; have one, infinite, or no solution