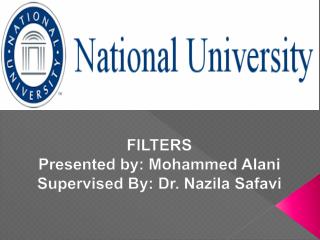 Our Favorite XSS Filters/IDS and how to Attack Them - . most recent version of slides can be obtained from blackhat’s

Fourier Transform Analysis of Signals and Systems - . chapter 6. ideal filters . filters separate what is desired from

Supervised Learning - . introduction. why “learn”?. machine learning is programming computers to optimize a