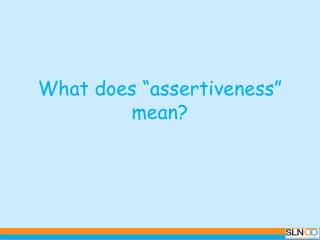 What does “assertiveness” mean? What does “assertiveness” mean?

Chapter 2 Assertiveness - Caldwell college. chapter 2 assertiveness. what does it mean to be “assertive”?. standing

Overview of This Unit - . a group report conflict: the positive: groups vs. individual problem solving the negative:

Communication and assertiveness skills for IT Staff - . tony brett head of it support staff services it services

Women in IT Ulrike Weitz - Background. tech-ed two years agoinvited all the technical ladies to lunchgreat support from

Being Assertive in the Workplace - 2. session programme. assertive and non-assertive behaviourunderstanding angerthe ok

Assertiveness 101: - . intro to saying what you mean and meaning what you say. three patterns of communication.