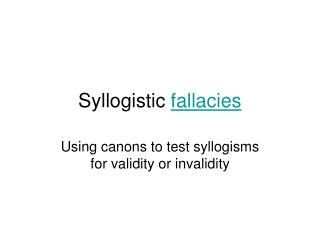 Syllogistic fallacies. Using canons to test syllogisms for validity or invalidity. Canons. Another word for ‘ rule ’ (Gk. κανων, “ rule”; OED 2b), but to be distinguished from ‘ rules ’ of inference, etc. that you’ll learn about in PHIL 305.

5 Categorical Syllogisms - . 5.3 rules and fallacies. categorical syllogisms. there are 5 rules for and 5 corresponding

Statistical syllogisms - . ...and why generalizations aren’t always accurate. what is a statisical syllogism?.

Logical Fallacies - . continuing our foray into the world of argument. monty python. what is fallacy?. the art of the

Rules of the Syllogism - . first rule of quality (q1). there can be only one negative premise. no b are l. negative no s

Syllogism - . a chain of reasoning moving from general, universal principles to specific instances. a form of deductive

Argument - . requires premises and conclusion non-arguments : i don’t like chocolates ; chocolates are makes you sick;

Argument, Logic, &amp; Logical Fallacies - . based on 2 statements with a 3 rd that follows the first two. one major

Fallacies - . chapters 8 &amp; 9. deductive reasoning . from general to specific; have a law, premise, or principle