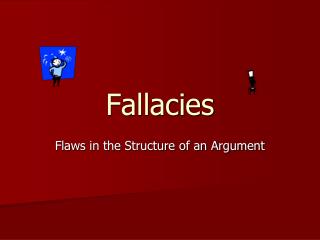 Fallacies. Flaws in the Structure of an Argument. What are fallacies?. Fallacies are defects in an argument. Fallacies cause an argument to be invalid, unsound, or weak. Fallacies can be separated into two general groups: formal and informal . . Formal Fallacies.

FALLACIES OF WEAK INDUCTION - . connection: connection between premises and conclusion is not strong enough to support

Some Logical Fallacies - . fallacies are standard forms of flawed reasoning that seduce and often persuade us, but that