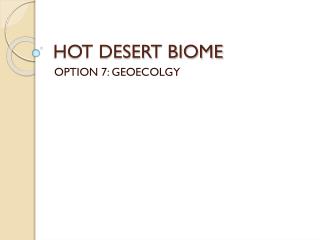 HOT DESERT BIOME. OPTION 7: GEOECOLGY. WHAT IS A BIOME. Biomes are unique natural world regions which are controlled by climate. Examples include tropical rainforest, deciduous forest biome, the desert and the tundra. There are four main parts of any biome 1) climate 2) soil 3) plants

Desert - . by: paige brooks. desert facts. desert is dry animal precipitation half an inch a year temperatures hot during

Desert - . by terrance carter ms.post. desert . a desert is a area that loses more moisture than it gains. lack of

The Desert Biome - . by hannah akhtar 6e. introduction . good morning ladies and gentlemen, i am going to give facts

Desert Biome - . the desert. deserts are areas with dry climate: they receive little rainfall and have high levels of

Desert Biome - . by: jake murphy, kyle forman, and antonio torres . plant life. the main types of plants that can

The Desert Biome - . by: sarah pollack. what is a desert? . a desert is a biome in which the temperature is normally very

Desert Biome - . by justin kermeen and devin wright. biome map. deserts are in all continents. deserts also cover 1/5 of

Desert Biome - . jordan petkoski and michelle espinal. what is a

Desert - . by max miranda. all facts and photos are from www.mbgnet.net. desert biome fun facts. the two largest deserts

Desert Biome - . by : lance kelly. mojave desert. the mojave desert receives less than 10 inches of rain a year and is

The Desert Biome - . *less than 15 inches of rain annually. *generally has some types of trees, shrubs, and grasses.

Camping and outdoor activities - Get involved with nature. - Camp and ride moapa provides a lifetime experience to the