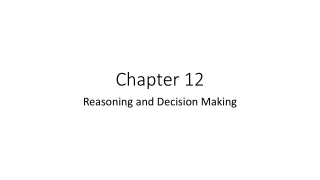 Chapter 12. Reasoning and Decision Making. Deductive Reasoning : Going from a general statements ( Premises ) to particular cases. No new information is added. It is like Arithmetic. We use logical rules to compute conclusions that logically follow from the premises.