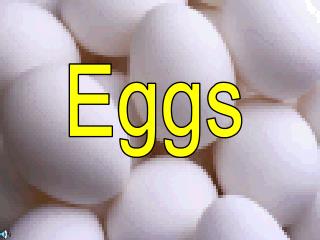 Eggs. Cooking Rules for Eggs:. 1. Avoid excessive temperatures. 2. Avoid excessive cooking time. Functions of Eggs:. Other than the obvious two…flavor and color. 1. They cause foods to get thick… “thickening ”. Eggs - . structure of the egg . albumen: egg white will be come thinner as eggs age the fresher the egg the cloudy-white

Eggs - . what you need to know. composition of an egg. a whole egg consists of a yolk, a white, and a shell. in addition,

Eggs - . eggs are important! they are responsible for holding the cake together so that is doesn’t fall apart. flour.

Eggs - . lion mark. the lion quality mark shows that eggs have been produced to the highest food safety standards.

EGGS - . nutrients. eggs are a nutrient dense food and contain essential amino acids as well as many vitamins and

EGGS - . let’s first start off with the structure of the egg. tip: the outer egg shell is rich in calcium and so is

Eggs - . class a eggs are clean fresh have unbroken shells class b eggs are removed from their shells and pasteurised the