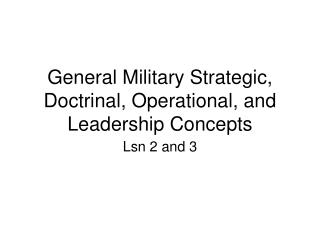 Concepts and Operational Definitions - . theoretical assumptions. concepts can be:. one dimensional and have only one

STRATEGIC LEADERSHIP DEFINED - . all men can see the tactics whereby i conquered, but what none can see is the strategy

Becoming a Strategic Partner:  Key Leadership Competencies - . objectives: understand what it takes to meet the emerging