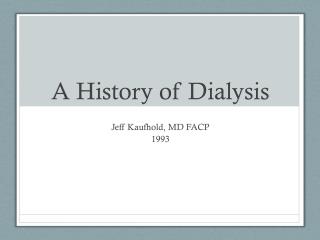 DIALYSIS - . the term dialysis :. dia , meaning through, lysis , meaning loosening or splitting. when your kidneys are

Dialysis - . chapter 47. dialysis. movement of fluid/molecules across a semipermeable membrane from one compartment

DIALYSIS - . prepaid by : furkan tekin neslinur yıldız. what do you know about dialysis ?. what is dialysis ?. to get

Dialysis - . begun when the patient’s uremia can no longer be adequately managed conservatively initiated when the

Dialysis - . allam rizqallah the palestinian kidney transplant center s.a.h 1/2/2005. dialysis . is a process where by

Peritoneal Dialysis - . kidney a&amp;p. i.  kidneys a. location - back of the abdominal cavity. the right kidney is

Dialysis Nutrition - How much do we know about our client's nutrition?. information can be found