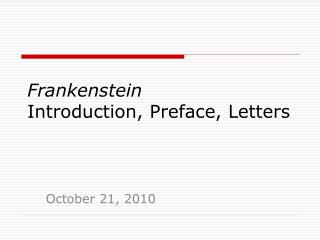 Frankenstein Introduction, Preface, Letters. October 21, 2010. 1. Why did Mary Shelley write Frankenstein ?. She wrote it as a response to a challenge by Lord Byron to think of a ghost story. 2. What discussions influenced the development of her idea?. The Periodic Table - . using numbers and letters as symbols for the elements. press enter to continue. the periodic

You Can Know Your Letters Too! - . start here. by meredith bauer. this button means…. go to the next slide. go to the

rtyu - . introduction. amr saber el- sayed barakat. about the project. what dose mask mean? it refers to the common first

Breaking Through the Zero Lower Bound - . miles kimball presentation at the federal reserve board november 1, 2013.

MULTIPLE CHOICE - . a. b. c. d. 1. who is convicted of the murder of victor’s younger brother, william?.

PREFACE PRESENTATION - Hide this slide. preface presentation. many of the graphics in this presentation are animated gifs

Analyzing the Preface - . “ montage of a dream deferred”. what is the purpose of a preface?. preface comes from the