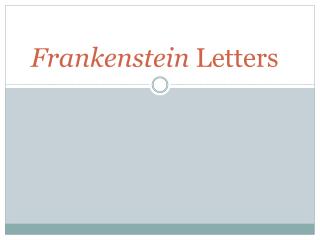 Frankenstein Letters. Essential Question. How do authors use setting and point of view to create an atmosphere that develops the major themes in their work? Atmosphere: Feeling or mood, usually created through descriptive details and connotative language

Mary Shelley and Frankenstein: An AP Introduction - . when?. in the summer of 1816, 19 year old mary wollstonecraft

Frankenstein - . a scene taken from the film version of frankenstein directed by james whale in 1931, starring boris

Frankenstein - . the movies got it wrong!. throw out everything you think you know about frankenstein. the monster is not

Frankenstein - . letter 1 analysis. timeline. themes to consider in this section. lost innocence his ambition comes from

WALTON’S CONCLUSION: LETTERS - . frankenstein lecture 7. overview. the frame story is completed with a return to robert

Frankenstein - . introduction. publication. - published in 1818 - although a perfect example of the gothic tradition, it

WALTON MEETS FRANKENSTEIN: LETTERS - . frankenstein lecture 1. overview. in a letter to his sister margaret in england,

Robert Walton’s Letters - . t he opening of mary shelley’s novel ‘frankenstein’. by the end of the lesson you

Frankenstein - . volume i analysis. loneliness. the first volume introduces the reader to a major theme in the work: