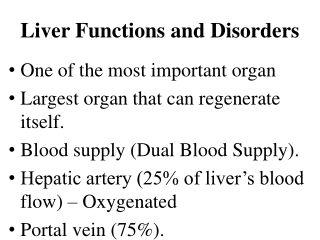 Liver Functions and Disorders. One of the most important organ Largest organ that can regenerate itself. Blood supply (Dual Blood Supply). Hepatic artery (25% of liver’s blood flow) – Oxygenated Portal vein (75%). Anatomic Structure of the Liver. LIVER AND BILIARY PASSAGES - . dr. mujahid khan. liver. liver is the largest gland in the body its basic functions are

H4 Functions of the liver - . assessment statements . h.4.1 outline the circulation of blood through liver tissue,

Liver - . objectives location of the liver indentify the surfaces of the liver and their anatomical relations porta

The Liver and digestion - . dr. than kyaw 7 may 2012. the liver  . largest organ in the body located behind the

Liver transplantation - .  is the replacement of a diseased liver with a healthy liver allograft. used technique is

DRUG,TOXIC AND METABOLIC DISORDERS - . drugs and the liver. summary of types of drug-induced liver disease. necrosis -