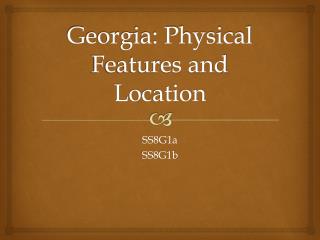 Georgia: Physical Features and Location. SS8G1a SS8G1b. SS8G1: The student will describe Georgia with regard to physical features and location. a. Locate Georgia in relation to region, nation, continent, and hemisphere . Where in the world is Georgia?.