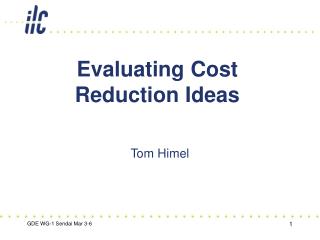 Evaluating Cost Reduction Ideas. Tom Himel. Why is this a problem?. If a proposed change decreases the construction cost and has no other effect, it is simple. Accept the change. What if it introduces a risk? What if it just defers an expense to a later operating or improvement budget?

Using and Evaluating Instructional Materials - . “ you should have a good idea of your destination, both in the

Process Cost Systems - 18. process cost systems. describe and illustrate the use of cost of production reports for

Chapter 7 - . the cost of production. topics to be discussed. measuring cost: which costs matter? cost in the short run

What is Cost and Project Cost Management? - . cost is a resource sacrificed or foregone to achieve a specific objective

Cost Management Concepts and Cost Behavior - . chapter 2. what does cost mean?. there is no single definition of cost