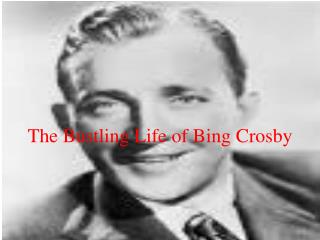 The Bustling Life of Bing Crosby The Bustling Life of Bing Crosby. Early Life. Born on May 3, 1903, in Tacoma, Washington. His original name was Harry Lillis Crosby. Singing career started in 1924 in LA. His first band was called The Rhythm Boys. Early Life Cont. He became king of the theater and radio in the 1930’s.

The Bustling Life of Bing Crosby