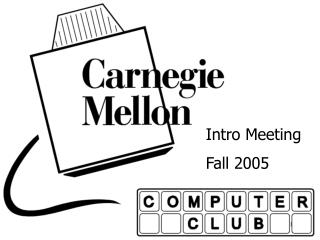 Community Expectations for Campus Computer and Network Security: A Wrapup

Introduction to Integrated Systems Design Automation - Outline • why do you care? • technology trends • process and

Introduction to UML - . fall 2005 oopd john anthony. what we’ll discuss. what is uml (and a bit of history) why we need

Introduction to Zoology - . unit 1- mrs. stahl. zoology- what is it?. the study of animals of course!  extremely broad

INTRODUCTION TO ZOOLOGY - . taxonomy and classification. zoo= ology= . animal the study of. meaning of zoology. animals

The Desert Locust - . fres 1010 fall 2005 prof. e. kraemer. intro. the desert locust is notorious as a swarming pest with

Welcome to PSA Fall Basketball Coaches Meeting - . please pick up your team’s coaches folder. be sure the folder has