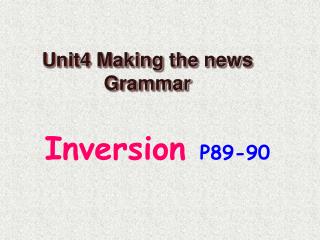 Unit4 Making the news Grammar. Inversion P89-90. Sample sentences. 1. Never will Zhou Yang forget his first assignment at the office of a popular English newspaper. 2. Not only am I interested in photograph, but I took an amateur course at university to update my skills.

Unit4 - . cultural background. 1. fun can be defined as a pleasurable experience, enjoyable occupation or an activity

Unit4 Business Analytics - . what is the product?. a business intelligence tool kit, specializing in coporate performance

Unit4 - . cultural i nformation. 1. a variety of foods most commonly eaten in china. cultural information 1. in general,

Unit4 Wild animals - . reading. by guo xiaoyue. a riddle they are beautiful black and white animals .they look like

Unit4 Sharing - . sharing. share: to have, use, pay, or take part in something with others among a group rather than