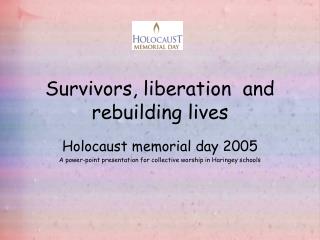 Rebuilding Broken Lives Nehemiah 5 Page 407 in Pew Bibles - . nehemiah 5:1-13. there was a widespread outcry from the

Rebuilding Shattered Lives Campaign A Service Perspective - . background to the campaign. outcomes data– women were not

Liberation Theology - . to be a witness to the resurrection means choosing life, life in all its forms, since nothing

LIBERATION THEOLOGY - . using the bible to demand socio-economic justice for the poor liberation from injustice how far

Liberation Theology - . elliott wright. preferential option for the poor. liberation theology begins with the poor; it is

Sexual Liberation and Equality - . gay rights movement from 1975 to 1979 by: devin schmiemann. sexual liberation and

Rebuilding Europe and Japan - Following its defeat, japan was occupied by american forces. it soon adopted a democratic

Rebuilding Together - . volunteer information. rebuilding together . our

Rebuilding Alabama - . chapter 6. chapter 6:rebuilding alabama lesson 1. think about a time when you and another person

Freedom and Liberation - . break free from your past. 24 february 2013. where are we coming from? . history? . free from

SURVIVORS TEACHING STUDENTS: SAVING WOMEN’S LIVES® - . objectives. through the stories we will share with you today,